(Queasy stomach alert: If you don’t like injury stories, please don’t continue. It’s not totally a hurl-your-guts story, but some tummies are extra-sensitive and if you are on that side of the scale, you might wanna pass on this one…)

I started a new position at work on Monday past. Unlike most new positions the last several years, there wasn’t anyone I knew at this new one. I was starting with a completely blank slate (other than the references that got me the job). There’s a lot of power with a blank slate – you can put ANYTHING on it. And on that first day, being the time of first impressions and all, what you put on it can be very, very…very…important.

What did I put on mine? This: 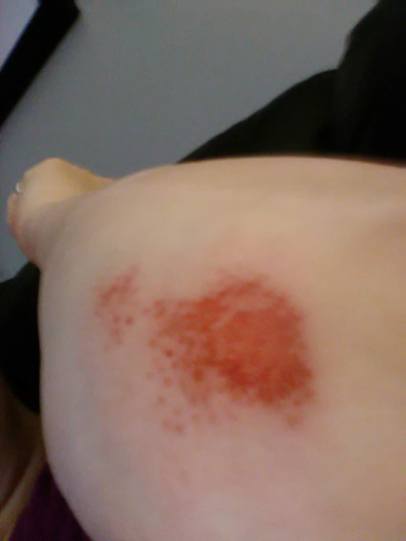 This was taken on Tuesday. It’s not a great shot…it looked a lot worse…much more “raw meat”-esque than it does here. 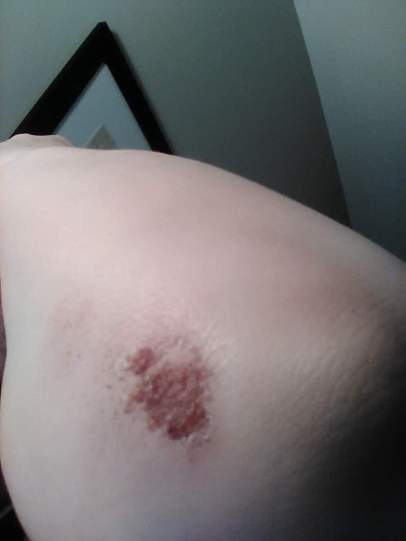 This was taken today… still quite sore, but the scabbing has started….yay!

No, no…please – hold the applause.

Like most of the injuries I’ve had in my life (including breaking an ankle BEFORE a softball game), I don’t have a great story to go with it. Not even a lame “I took a dive to save a tipping printer” office story. Nope. Wanna know how I did it? (Don’t bother popping popcorn for this…honestly, it’s not worth it…)

Seriously, though…I was heading down to the cafeteria for lunch. I pushed the elevator call button and leisurely paced back and forth in the hall while I waited. Soon enough, I heard the chime announcing an elevator’s arrival and I turned to head towards it. (In a movie, this is where the music would become louder, to indicate something big was about to happen and bring you to the edge of your seat.)

I’ve mentioned my age before, but in case you’ve forgotten, I’m 48. I’m not new to this whole “foot at the end of your leg” thing, or walking, or any of that stuff. I’ve been doing it for quite a while now. Yet somehow (and I’m really and truly not sure how), I stumbled as I turned. I didn’t trip on anything…it’s a flat floor. I didn’t slip on any spills…it’s a carpeted floor. There weren’t even any wrinkles in the carpet. I just…stumbled.

Not being one to give in to a challenge, I was sure I could recover. I took a step forward and tried to regain my balance. Nope…didn’t work, so I took another step. Nah ah…so another step. And another. And another. Flashing occasionally in my mind at the same time was, “Man, I’m glad nobody else is here!” With each step I was angling closer and closer to the ground and after about the fifth, I knew it was a losing battle. Well, to be honest…it was a lost battle because down I went – THWUMP! And I went down harrrrrd – right in front of the now-open elevator doors.

Having my priorities in the right place, the very first thing I did was look inside the elevator. The Bad Fall Gods had taken pity on me again. Not only was there no one in the hallway, there was no one in the elevator!! YAYYYYYYYYYYYYYYYY!!!! There are definite perks to taking a late lunch.

Then I got back to the business of the moment: How badly was I hurt?

I did a quick check (still on the floor). Nothing was broken. My head felt odd and fuzzy, but only inside as I for sure hadn’t smacked it on the floor as I went down. My shoulders were feeling the impact, though, and I knew that would only get worse as time went by. I must have landed on my forearms as opposed to my hands, so thankfully there was no damage my wrists.

I picked myself up and tried to shake off the fuzzy headedness. That didn’t work (the headache lasted a few days), but since I was still hungry, I continued with my plan to get lunch. While sitting there, eating my sandwich, I discovered the carpet burn on my left forearm, which I did by innocently putting my arm on the table, as normal, to hold my book, the edge of the table cutting right across the scraped skin. O.U.C.H. I am very proud of myself, actually, for not having sworn like a sailor at that moment.

Anyhoooooooooooo…fast forward to me telling my new boss what had happened, which involved paperwork (every boss’s dream), and spending the rest of the afternoon repeatedly explaining to my new colleagues what had happened. If THAT didn’t fill them with confidence in me, I don’t know what would.

2 thoughts on “How not to impress people on the first day at your new job, or “What did you do now?””