This is my mother.

This was taken at my oldest brother’s wedding on August 4, 2000. She loved that hat – she thought it was hilarious. (No…she did not wear it as part of her outfit for the day – she just wore it for this picture. 🙂 )

Her name was Mary. Mary Catherine, to be precise. The two previous girls born before her were both named Catherine and they died while still small infants. My grandmother didn’t want to chance it when Mom came along and added a “Mary” before the “Catherine”. It worked – she lived.

That, in fact, was her legacy.

She was a woman who loved nothing more than being a wife and a mother. When we were teenagers and able to take care of ourselves, we encouraged her to get a job. She did – at one of the mini-marts in town – but it didn’t last too long. She didn’t like it. She wanted to be home – she wanted to take care of the house and us. She absolutely loved being a housewife. I had assumed she didn’t work because she felt she needed to be home when we were younger, but no. She didn’t work because she wanted to be home. Not because she was lazy, but because taking care of our home and of us was her dream job.

I was thinking about that the other day when I was mulling over some ideas for this post. For the first time I thought that our efforts to encourage her to get out of the house because we no longer “needed” her – efforts that were intended to give her the freedom to do what I, at least, assumed was what she really wanted to do – quite possibly had the opposite effect. As an adult, I now know that one of the most painful times in a mother’s life is when she realizes her children no longer “need” her. It can be quite a punch in the gut. For Mom it didn’t just happen naturally – we practically shoved it onto her. “We don’t need you anymore! You can do what you want now!” Ouch. I’m 48 and I only just clued in to how that must have sounded to her back then. What she wanted was to be needed – by us – and we trashed that.

She’s been gone for over 10 years now. I miss her laugh and the way her eyes twinkled and scrunched up when she laughed. I miss her beef stew, baloney and gravy…and her bread. Oh my gosh – her bread! I still long for her cool hand on my forehead when I’m sick.

She didn’t get married till she was almost 34, which in the 1960s was quite old. For Mom’s plan it was quite old, too. She said she wanted to have as many kids as her Mom did, which was 15. She and Dad had the four of us within the first five years of their marriage and she also had four miscarriages so I don’t doubt that, had she married at the more typical age of her time, she very likely would have given her mother a run for her money!

Because she was so softhearted we could pretty well wrap her around our finger so she had to make frequent use of the maternal standard of “You wait till your father gets home!” She was also, to me, the more fun parent. Dad was the more serious one in the family, which was probably needed. His oft-used refrain was, “Mary, you’re worse than the youngsters!” Two memories I have that would have elicited that response were an ice cube fight when I was still in junior high or high school and then a shaving cream fight when I was in university. On both occasions, there was running and screaming and it was messy, but it was also funny and fun.

I’m so grateful for those memories.

Mom and one of her sisters (Aunt Vi, we think). 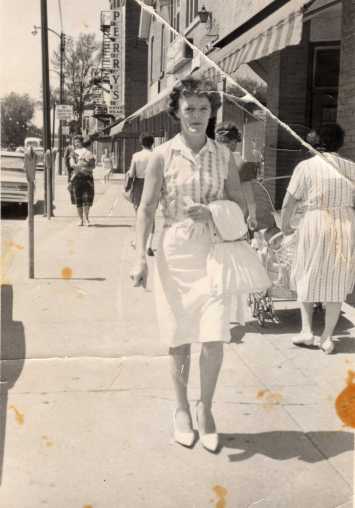 I didn’t really get to know my mother as an adult. I had moved away by my early 20s. I visited for a couple of weeks every couple of years, but that’s not the same. As I talked about in a previous post, I had a year with Dad after I had moved back to Newfoundland in 2007, but by then Mom was already in a nursing home with Alzheimer’s (the reason for my move). It had been coming on for several years before it hit a critical point and she had to go into a nursing home in early 2006.

The first time I saw her when I got home that September, she looked at me with a mixture of confusion and curiosity. “You looks some familiar to me…,” she said, the question hanging at the end of her statement.

“I should,” I replied, ignoring the unintentional sting of being forgotten and forcing a laughing lightness into my voice, “I’m your daughter!”

Her eyes brightened and a smile filled her face. “Jesus, Mary and Joseph!” she exclaimed, looking at the others sitting nearby. “That’s my daughter! Home from Alberta!”

She never forgot me again.

Over the next four months before she passed, we had lots of visits. Most times, the visits were at the nursing home, but sometimes I would take her for a drive in and around the city and to visit some friends and family. Inevitably, though, she would become anxious after only about an hour or so and want to go back to her “apartment”.

But Mom wasn’t really there. So much of who she was had already disappeared and more was lost as the weeks moved on. But I’m still grateful for that time that we had.  I can’t imagine my life now without those four months in it.

This post, however, isn’t about her passing. It’s about her birthday. Today is one of them.

Growing up, we all thought Mom was born on July 4, 1934. We teased her sometimes about being a cradle robber, as she was two years older than Dad – also quite unusual at that time. Then in the early 1990s, she had to get a copy of her birth certificate for something and when she got it, it turned out that she was actually born on July 12, 1933! 51 weeks older than she thought she was and, obviously, an extra older than Dad. It was funny and there was more teasing.

Despite what that little piece of paper says, it’s always felt more natural to celebrate her birthday on July 4, so that’s why I’m writing this today. 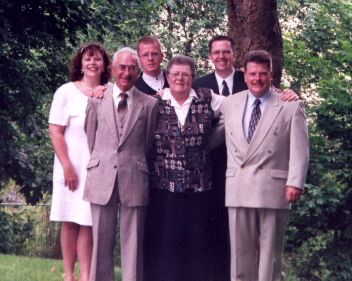 This is our family at my oldest brother’s wedding (the guy to Mom’s left) in August 2000.

9 thoughts on “Mother Mary Comforts Me”