This post was written on Sept 14/19, at various stages of leaving Killarney to go to my final destination of Waterville.

Surprisingly, I slept better than I thought last night. A 5-hour time difference does do a number on you, but I think I’m good now!

My room booking included room-delivered full breakfast, which was definitely a great way to start the day. I forgot to ask for ketchup, though. Sausage without ketchup just isn’t the same, but I didn’t want to be a bother by bringing down for some so I somehow survived without!! 🙂

I toodled around again after breakfast before coming back to check out. There are loads of pubs and interesting shops – mostly geared towards tourists. I didn’t buy anything, but got some ideas for gifts towards the end of my trip.

Once I checked out, I left my bags at the front desk and headed off for lunch. I asked the girl at the front desk for a recommendation – there are loads of pubs around, but I wanted something different so I asked where she would go. She recommended the Cafe du Parc so that is just where I went!

I ordered the club sandwich. It didn’t come with anything, so I was skeptical as to whether or not it would be enough, but it was quit filling on its own. In fact, I only ate just over half of it. It was really yummy, too! 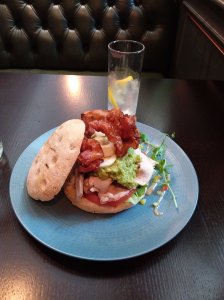 The club sandwich at the Café du Parc

After lunch, I scoped out info on some tours for when I come back in a couple of weeks, particularly for Killarney National Park because if I don’t go there while I’m in the area, my brother Bill might disown me. 🙂

Now I’m waiting for the bus to Waterville to depart. While standing outside waiting, I got hit on by an octogenarian (possibly even a nonagenarian) named Michael, so I guess I still got it…?

While waiting my turn to load my bags into the bus, I saw a young fella putting a bag in the storage area. He had thick, fuzzy, fingerless gloves and I wondered if he was the bag loader, but he left and went back to the boarding line so I figure nope…he’s a passenger.

Then it was my turn to load and he came over and did it for me – before I had even started. So I changed my mind again and thought, ok, he must be the baggage guy.

But..the story does not end there!!! When I got on, there he was, a seated passenger.

He wasn’t the baggage guy. He was a nice guy who just took it upon himself to do a nice thing. And it wasn’t even as though I had been struggling with the bags. I hadn’t even started when he came over. He was just a nice young guy.

As I walked past him on the bus, I thanked him again. He chuckled a little, with a little shyness, and said, “It’s no problem…”

As it says in one of my favourite quotes:

Feeling gratitude and not expressing it is like wrapping a present and not giving it. (William Arthur Ward)

The bus ride itself was absolutely fabulous!!! If you are ever in the area, be sure to take a bus tour. It’s stunning. I didn’t take many photos – I thought about it lots, but just wanted to enjoy the view and not spend my whole time looking at it through my tablet camera viewer.

When I got to my place in Waterville, I unpacked, went for groceries, put those away, and then went for dinner at Dooley’s before hunkering down for the night. It was just soup and salad, but I tell you what – the dressing was delicious and the vegetable soup was the best soup I’ve had in I don’t know how long!

As an aside, from the time I arrived in Killarney and till now, everybody has been talking about today’s (Gaelic) football match between the Kerry team and Dublin. Being in County Kerry, everyone has been hoping for Kerry to win and green and yellow jerseys have been everywhere. Sadly, while I was eating, I could hear from the bar side of the restaurant that Kerry had lost.

As with all sporting matches — particularly rematches like this one – there was a super fun energy leading up to it the past two days since I’ve been here. Even the cashier at the grocery store was fully into it. She wasn’t thrilled about only being able to listen on the radio and not be able to see it, though!

Anyhoo…Here are some photos from today (Sept 14):

2. An ocean view on the route to Waterville

3. A video from my patio – the location is why I’ve taken this place. The sight, the sound, and the beautiful salty sea smell!

3. A sunset view from my place in Waterville

4. My dinner at Dooley’s 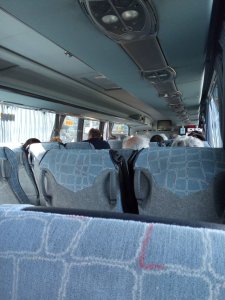 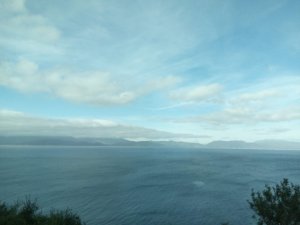 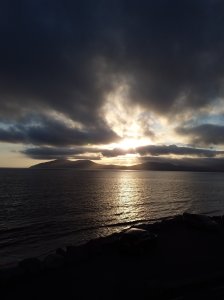 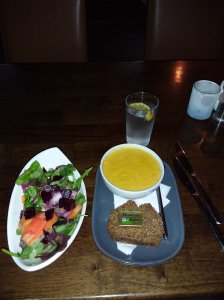