It’s been a day of not sitting very still.

This morning, I went for a few groceries that I didn’t think of on Saturday. I had also planned on going to the tourism office, but it was closed till noon. So I just went for a little walk before picking up the groceries and coming back home.

I then did the boring, but necessary, check in on the budget. It’s not my forte and if I’m not careful, I could spend the works of it within days and have nothing left for the rest of the trip. That would make for a very boring time!!

After that, I headed to the tourism office where a lovely gent named Barry gave me some really good tips and suggestions for things to do while I’m here. If I do only half of what he suggested, my FitBit will be very happy!

From there I headed to An Corcan restaurant for another late-ish lunch. I had the chicken panini and fries. The panini was delicious but the fries were meh.

I think they maybe had been through quite a rush during the regular lunch hour (I had counted at least 5 tour buses in town on my way to the tourism office). It seemed a strain for the owner to be friendly.

I don’t mean to imply that she was rude. She wasn’t. She just seemed…frazzled. Bless her heart.

After that, I popped into the post office. I had bought two postcards there this morning on my sojourn, but couldn’t find them when I got home. So I checked in and yup, I had left them there. (See…when I say I’m forgetful and easily distracted, I’m not joking!)

I came home again then, postcards and all my pamphlets from Barry in hand, and caught up on a few emails.

I opened the windows for a while, but dang…there were a kajillion little flies all over the place! I massacred a goodly number of them (they wouldn’t shoo out the window) and closed everything up. New investment idea: Window screens. One good marketing campaign and you are in the money!

We were heading towards 5:00 by then and I thought about putting the chicken in the oven. But then I figured that by the time it’s done and I’ve eaten, it would be dark.

I wanted to go for a walk and doing that in the dark isn’t the smartest thing. The roads, as you may know, are very narrow and there aren’t shoulders to speak of.

Ending up in a ditch (or the hospital) is not on the top of my list of things to do on a holiday (or any time, truth be told!), so I opted for the walk first.

I went to the south/east this time, on a path along the bay for about half of it and then along the road. I went as far as the Currane River and it felt like it might rain so I turned back.

I’m in now for the evening, I think. That’s enough in-ing and out-ing for one day I do believe! Except now (7pm) it’s a bit late to put a chicken in the oven, so I might need to go out again for supper. 🙂

The third picture is for my cousin Juanita who is following along. 🙂 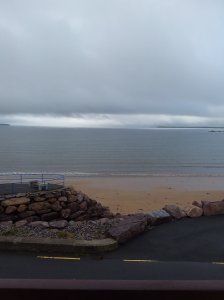 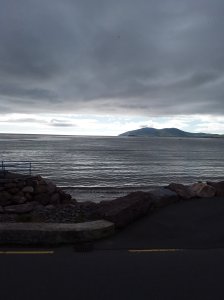 If you enjoyed this post, don’t forget to subscribe/follow!